Congratulations to new members of the USATAA Coordinating Council! Congratulations on Continuing Education approval by the American Psychological Association and the ACE Social Work Consortium! 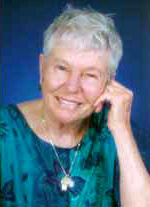 Elaine Childs-Gowell, Ph.D., much loved and respected member of USATAA and ITAA, died peacefully 26 June, 2006. Elaine is best known for her book, Good Grief Rituals and the many workshops she led on the subject of grief. She will be greatly missed. “As long as we live in and from our heart she will be right there with us” an altering of her own words to a grieving friend.

Elaine was the 2003 winner of the Muriel James Living Principles Award which was presented to her at the Intl. Transactional Analysis Assoc. conference in Oaxaca, Mexico. Elaine was a Psychiatric Nurse Practitioner with a private practice in Seattle, Wa. She had practiced since 1970, and was the first Psychiatric Nurse Practitioner to establish a practice in the Northwest. With her husband, Richard Gowell she raised four adopted children who were attachment disordered before this diagnostic category was established. She wished she had known what she later learned in raising their own adopted children. In her practice with adults she recognized that most of her clients had bonding difficulties she called them her “motherless children” – because the nature of their discomfort and dysfunction was classically due to lack of attachment and bonding when they were young. Typically her clients’ Self Care skills were minimal, many suffer with addictive behaviors and depression, which is often indicative of deep grief. She was certified in a number of modalities including EMDR, Hypnotherapy, EFT, TFT, Cognitive Behavioral processes and Reiki. The Corrective Parenting, Rechilding and Reparenting procedures and “rituals” were developed as a result of Elaine’s experience writing her PhD dissertation about the Cathexis Institute in Oakland California where the Reparenting process was developed and her own experience with helping clients heal their developmental needs.She was the author of Reparenting Schizophrenics: the Cathexis Experience. Bodyscript Blockbusting, and Good Grief Rituals. Stages of Ages: it’s never too late to have a happy childhood and Regression and Protection: a Handbook for practitioners doing deep regressive work with clients. She taught workshops and gave speeches on the Good Grief Rituals processes at conferences around the world and continued a private practice in Seattle. Her website is www.goodgriefrituals.com You can learn more about her on this beautiful website. 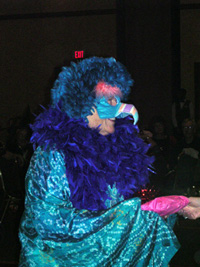 Elaine would appreciate being remembered as a bird at the Halloween party at the Nashville USATAA conference. She has always been young at heart and great fun. I admired her spunk and high energy.

Elaine was also a spiritual person and someone I could always count on to listen, understand, and offer support and caring. She shared openly with others. At TA conferences Elaine would always come to the Women’s Caucus. She appreciated and empathized with other women. She was a gentle, genuine person who will be greatly missed.
Valerie Chang
Photo: “Blue Bird of Happiness” – Elaine at the Halloween Banquet, Nashville, 10/31/2005.

Elaine was among the first who registered for our coming TA conference in Istanbul. We did several email exchanes about her sharing a room at the Hyatt with another delegate and other such matters. She was so eager to visit Turkey. And I was going to surprise her by taking the same post-conference tour with her and Jean Illsley Clarke, two of my favorite friends from the TA community. I was shocked when I heard from her, or maybe someone close to her who wrote on her behalf, the news of her ill health and cancellation request. We kept her workshop space in the conference abstract book. With so many friends left behind, she will be with us in spirit, that’s for sure.
Fatma Reid.

The faces of the past are like leaves that settle to the ground…….. They make the earth rich and thick, so that new fruit will come forth every summer (I will ) Keep a few embers from the fire that used to burn in your village, some day go back so all can gather again and rekindle a new flame, for a new life in a changed world. [Chief Dan George, 1974] With love, joy and peace Anita Mountain