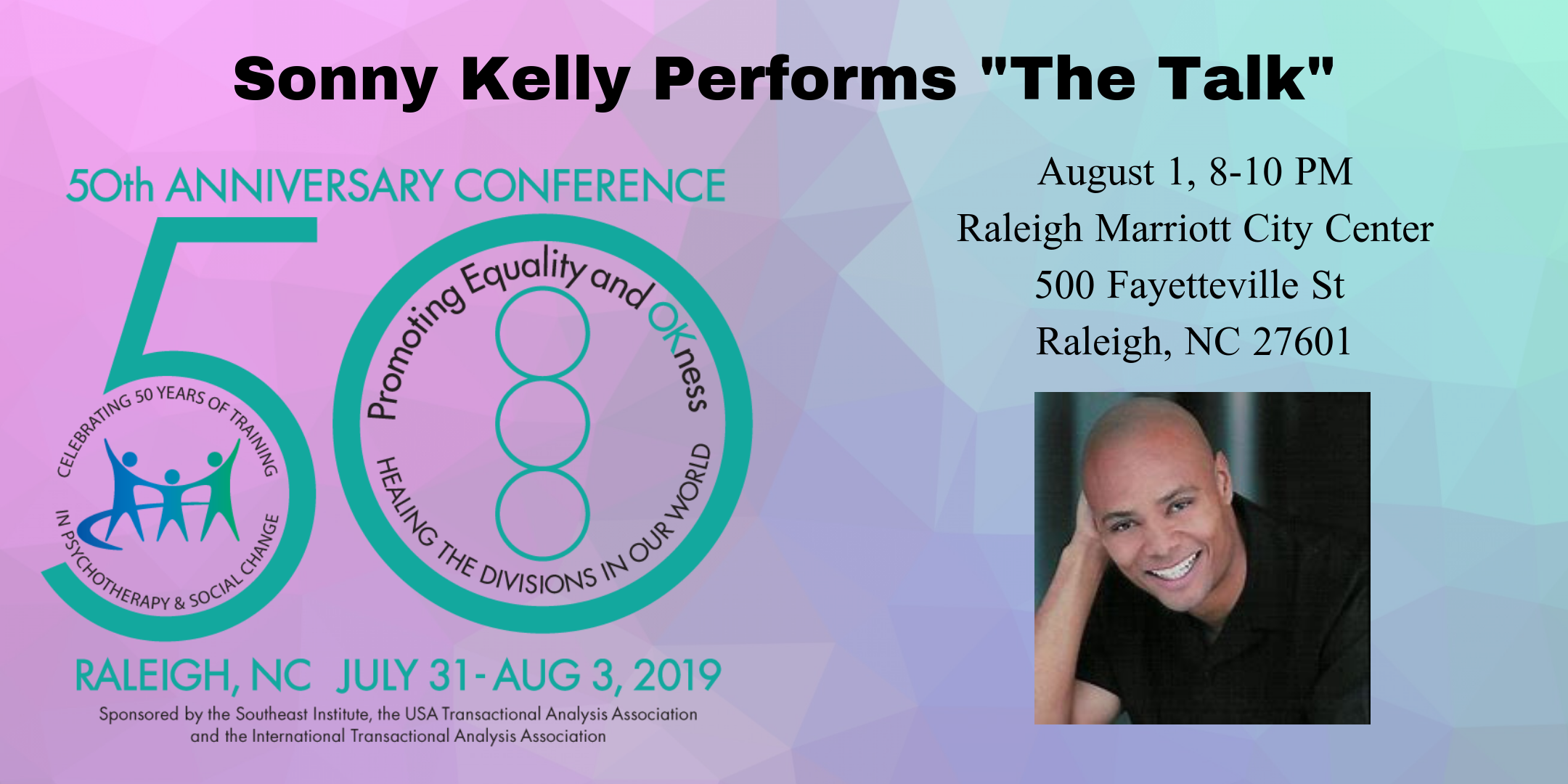 This performance is included with full conference registration. For those of you who are participating in portions of the conference or not at all in the conference and would like to attend the performance, tickets can be purchased for $25.

The following was written by Emily Keller, and is reprinted with permission from The Script newsletter.

Playwright and performer Sonny Kelly and I had a lot to talk about. He will perform The Talk at the 2019 Raleigh Conference on “Promoting Equality and OKness: Healing the Divisions in Our World.” I told him how

Sonny Kelly wrote and stars in The Talk.

I was interested in learning about his one-man play, and he wanted to hear more about my volunteer work with the Social Justice Theater of the Carolinas. The more we talked, the more we discovered how much we have in common. We found out that we were both military spouses and that both of our partners transitioned from active duty Air Force to the reserves. We both managed to earn graduate degrees from the same small Catholic university, and we even filled in pieces of research for each other. We are also both parents of all boys. As he described the joys of parenting, I felt Sonny’s love for his children. I also learned about his fears.

Sonny’s play The Talk is largely autobiographical and incorporates 20 characters throughout history to tell the evolution of the story of generational trauma for black people in America. Today, the trauma is represented by the conversation that black parents eventually must have with their black children. “The talk,” as it is known, involves letting their children know that they are often regarded differently in our society and that their survival may well depend on factors far beyond their control.

The fact that we cannot always protect our children is true for all parents. But as a white mother of boys, I do not worry about whether they will be called out, criminalized, or killed by the very people who are supposed to protect them.

Sonny and I discussed parenting in our society today. I acknowledged the difference between us and the freedom I have to let my children wear mismatched clothes and skip haircuts. I do this without worrying about how others will view them. In fact, when I do prompt them to change clothes, I often hear something like, “Too late, you’ve already taught me not to worry about what other people think. That includes you, Mom.”

The reality is that I do not worry about what other people think about my children. They may be judged negatively, but I do not have to worry they will be criminalized for their behavior. That is a burden I do not carry. Sonny and I both have boys on the cusp of their teens. He worries about what other people think— especially authority figures such as teachers and law enforcement officers.

“There were two events that led to this play,” Sonny explained. “The first was the shooting of Freddie Gray, a black man who was arrested and died in police custody. I knew then that I would have to talk to my older son about race and power in America. The second event was when I caught myself yelling at and gripping my son in public. He had just lost two quarters to a claw game machine and was really upset. He shouted and pounded the glass with his fists. Underneath all the anger, I was scared. I wanted him to shut down emotionally and stop acting out. I didn’t want anybody to call the police on my child because they saw him as an unruly black boy. In reality, he was just an upset child. I want him to get to be a kid.”

Sonny described how he started writing about the event to process the trauma related to living in a racially divided society. Those early writings eventually became a carefully crafted hour-long production. It was his way of using his power to invite change and create a society that is safe for everyone.

The deaths of black children and men in America remind me of the work of Tim Tyson, the author of Blood Done Sign My Name and The Blood of Emmett Till. He will be the speaker at the Raleigh conference opening reception. Emmett Till was killed in 1955; Freddy Gray died in 2015. Sixty years span these deaths. This invites reflection on our efforts toward healing, equality, and social justice in the United States.

The work to change our society so that it is safe for everyone must continue. As transactional analysts, we foster the OK-OK relationships that invite healing and justice. As an artist, Sonny Kelly does the same.

Sonny is optimistic. He balances his concerns for his sons and the world with his experience and belief that most people are good. His grandfather was a policeman, and he wants his children and others to see people like his grandfather for the heroes they are.

“Theater has the power to ease people out of their comfort zones and into an empathic connection between people who are very different. Through theater and the arts, we can explore and understand the experiences of others in ways that transform our lives. That’s why I do this work. The best compliment I received from an audience member was, ‘Thank you for calling me in, rather than calling me out.’ That’s what I want to do with this play: Call people in to each others’ experience.”

As audience members, we will all have the opportunity to join the conversation with Sonny Kelly as he calls us in to his experience—and to our humanity. Join us in Raleigh, North Carolina, for “Promoting Equality and OKness: Healing the Divisions in Our World,” 31 July to 3 August 2019.

I Want to Enjoy the Entire Conference

Our keynote speakers, conference opening speaker, and invited presenters and performers are globally respected authors, artists, social activists, and thought leaders. Join us as we explore how to heal the divisions in our world.