The Seventeenth Jamaica Gathering was a wonderful retreat.

A Gathering is a conference that combines retreat, learning,

natural beauty, and warm friendships in a self-organizing community. 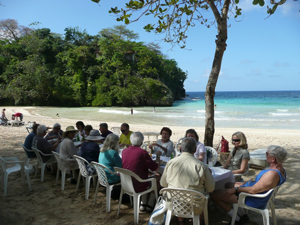 Retreat.  In February, nearly 30 people from the United States, Germany, Russia, and the Netherlands gathered at Frenchman’s Cove in Port Antonio, Jamaica. As the name implies, the resort boasts a cove, embraced by cliffs, where the ocean crashes into the shore. What the name doesn’t reveal, but is a wonderful surprise to newcomers, is that the ocean greets a small river.  The two waters meet at one end of the cove, where someone, many years ago (it seems) climbed a tree and set up a rope swing.

Ocean lovers walked out against the waves; River loves swam upstream and back again, and shore lovers soaked in the sun, the view, and quite a few books. Some of us did it all, and more, like painting with water colors, colecting coral, and chasing children.  Then, at the end of the day, we all retreated to our villas.

Learning. As a learning community, we gathered the first day, offered topics for sessions, and proceeded to break up into smaller groups.  Participants took turns leading each morning.  During their tenure, they helped organized lunch and dinner plans, and then helped the group divide according to learning interests. Topics were varied and included a TA introduction, publishing, electronics, thinking, happiness, ethics, and more. The presenters ranged from first-timers to seasoned pros.

Natural beauty. In addition to the natural beauty of the cove, the resort offered jungle-like images of vegetation growing within vegetation. Trees didn’t stand alone. Rather, trunks and branches served as incubators to new plants–fernss, vines, flowers, and more trees.  It was hard to tell where one began and the other one ended.  Purple flowers, white flowers, and more, called to passers-by asking to be picked and placed in hair or held in hands. Beyond the grounds, blue waters, water falls, winding roads, and of course, smiling faces adorned scenes everywhere.

Warm friendship. Old friends met again and new friends greeted each other for the first time. Perhaps the greatest testament to the power of friendships to form among strangers was the choir. Voices from three ccountries joined together to bring all gatherees a program of music that offered reflections of the good times had there, as well as friends who have passed on.

In the end, the gathering–once again–proved to be well worth the three-hour winding drive from the airport to the resort. We hope to see you next year, at the 18th-annual gathering in Jamaica.