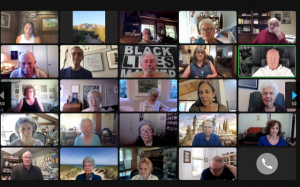 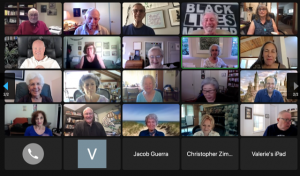 During the debriefing of the annual USATAA general membership meeting this year, Abe Wagner suggested a social gathering of members who have been in TA since the 60s 70s and 80s. Felipe Garcia liked the idea and brought it to the USATAA council for their endorsement and support. With the support of the USATAA, Jacob Guerra, Kristina Shea and Lucy Freedman, the gathering was held on zoom on June 11, 2022.

The Closing – After the breakout rooms, with a video from General Coordinator Bob Hempel.

There were 25 longtime members present. The gathering began with a “one minute” check-in including name, where from and participants’ history of their involvement with TA. Most participants mentioned their trainers, bringing up joyous memories of early TA conferences and training events.

The group then broke up into groups of four for personal sharing. The plan was to do two breakout sessions with different participants, however, the initial check in circle was rich and took longer so there was only time for one break out group session. Everyone who was present and reported seemed to have enjoyed the gathering and agreed to meet again in six months. The organizing group is planning the next gathering for January 2023.

Participants were invited by Abe and Felipe from their own mailing lists and asked invitees to invite others from that time whom they knew. If you want to be invited to the next gathering and were not invited to the first gathering, send an email to programs@usataa.org to be included next time.

There are other USATAA interest groups meeting which may be of interest to you, namely, The Transactional Analysis Practitioners Instructors group has met several times. Transactional Analysis Practitioners are interested in organizing a zoom gathering. (These refer to USATAA practitioners’ groups) A new members’ group is also being considered. Contact Wayne Hart if you are interested in these groups.

USATAA is in need of members to volunteer to serve on committees. There are many USATAA programs that could use your help.